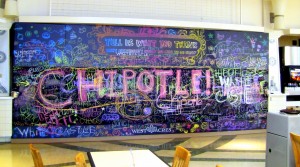 We’re most proud when our work helps our clients grow. Earning a little hardware for our clients in awards competitions always makes us smile, too.

The ADDY Awards are the world’s largest advertising competition, recognizing all forms of advertising from media of all types, creative by all sizes and entrants of all levels from anywhere in the world. The Flint Group has participated in ADDY’s for decades, and we do appreciate the recognition of our creativity from our industry peers.

Chalk up a Gold winner

West Acres regional shopping center won a Gold Award in the Interactive Media category for its chalkboard barricade graphic.  Last summer, West Acres food court had a vacant space to fill. To get visitors’ suggestions quite literally, we helped create a series of crowdsourcing tactics centered on a chalkboard in the food court area.

Just one day of visitors' ideas for a new restaurant in West Acres.

The artwork asked people what restaurant they’d like to see in the space. It went live and filled up in less than two hours. After recording the suggestions, West Acres staff members erased the chalkboard each night, leaving people a clean slate for fresh ideas the next day.

West Acres also reached out to its Facebook fans, crowdsourcing the same question. The winner: Qdoba Mexican Grill, which opened in time for Black Friday shoppers!

Get off the grid and win Silver

WoodMaster won a Silver Award in the Interactive Media category for online banner ads promoting the company’s latest energy efficient furnaces. Here are screen grabs of the flash ads in order of how they appear:

The headlines relate to independence, since people who heat their homes with WoodMaster furnaces, are free of oil shortages, nuclear meltdowns, power outages and just about everything else that makes front page news. We tagged the WoodMaster logo with UnPlug, because it further conveys that sense of independence.

Ads link to the re-designed WoodMaster website and its gritty, outdoorsy and independent look and feel:

Both campaigns now move on to compete at the National AAF ADDY’s competition, set for June 5 in Austin, Texas. Good luck, ya’ll!