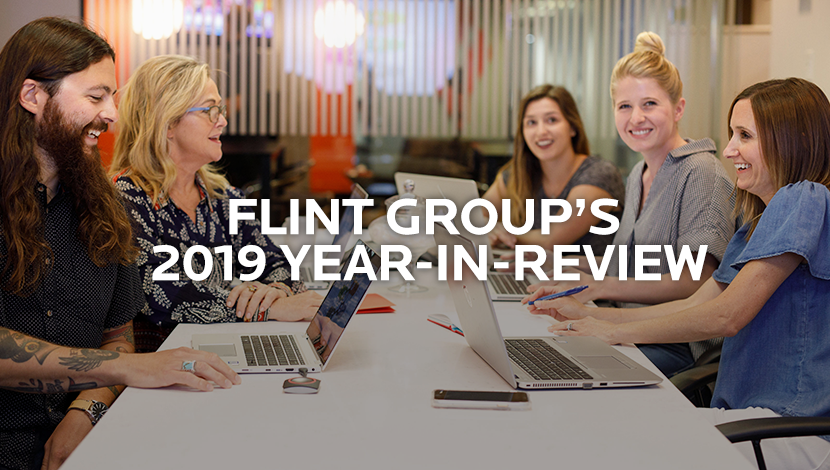 2019 was a tremendous year for us! From naming a new CEO to celebrating the achievements of several passionate employees, we’re so grateful for a year of innovation, redecorating and lots of celebrating.

Cheers to a grand year – read below to follow what Flintsters were up to throughout 2019.

“This is an exciting time for our team and family of companies. As we celebrate the culture and legacy Roger established, we are energized by our opportunities to evolve and grow.” Say hello to the new CEO of RR46! Andy Reierson has been in his new position since October of 2019, and we can’t wait to see what the future holds.

Our sister company has a new location, and we’re thrilled! (It’s now part of our Fargo office, so it’s that much easier to share treats.) Check out the full story behind Super Studio’s chic design.

Change is inevitable. Growth is optional. But not for us.

Our Duluth office celebrated an impressive 70 years in business. That’s a long time, especially in the agency world – they surely commemorated in style.

We launched our very own show, loosely inspired by Zach Galifianakis’s “Between Two Ferns”! Kris Kerzman comes at you live(ish) with a variety of guests. Find full episodes on Facebook, IGTV, YouTube and Comedy Central!

Other duties as assigned

2019 was a fabulous summer for our five Flinterns! From producing videos for the Fargo Police Department to promoting events for Special Olympics North Dakota, they didn’t have any spare time to fetch coffee.

In 2019, we were thrilled to celebrate the career of former public relations director Chris Hagen. Most of all, we want to thank Chris for her hard work and inspiration to those at Flint Group and beyond.

“Her impact here will never be forgotten,” Flint Group president Jodi Duncan said. “We all wish her many glorious days at the lake and very few days dealing with crisis communications!”

Each year, the NDSU BGS chapter recognizes one community member who has given back tremendously to Fargo Moorhead in a business capacity and upholds the qualities BGS fosters: Honor, earnestness, and wisdom. We couldn’t think of a better way to describe Roger Reierson.

Sadie Rudolph, public relations manager and strategist at Flint Group and a role model whose work has touched many regional communicators, was given the Communicator of Achievement award for 2019 from the North Dakota Professional Communicators (NDPC). Congratulations, Sadie!

The 2019 ADDYs took place in February and recognized our own Susan Hogen for earning the coveted Silver Medal Award. Susan is a pioneer of the advertising industry and has jumped from receptionist, to project coordinator, to Flint Group’s first female account executive. We will always have mad respect for Susan.

2019 was a year of many accomplishments and challenges. It’s all part of being in business, and we couldn’t be more excited to leap into 2020.

The key to strong, positive relationships

A new mom shares: 3 things I learned from maternity leave