Home / Flint Blog / How do you measure public relations?
Categories›

How do you measure public relations? 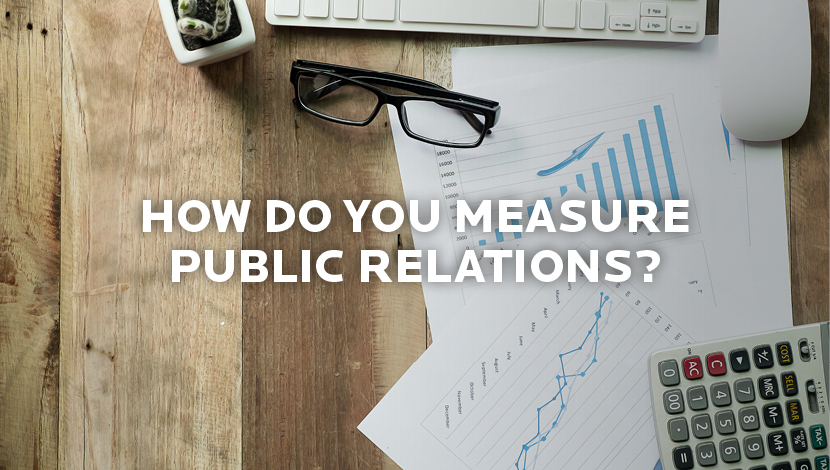 Public relations efforts are often seen only as a supporting component of a larger marketing campaign. While PR coverage is an imperative foundation, the standalone benefits are equally as impactful.

There has been a fundamental shift in the industry in terms of tracking and measuring public relations. For many, public relations came with no measurement. It has been described as a “necessary evil,” with little to no impact on the bottom dollar, but rather a contributing pillar to a loftier marketing goal. For others, statistics such as ad-value equivalent (AVE) and return on investment (ROI) are the standard to which their public relations efforts are measured against. While these statistics can show trends in PR efforts, the actual number can be difficult, if not impossible, to nail down.

AVE, for example, provides an easy-to-understand comparison for most. Where this mentality breaks down is that PR coverage is viewed as providing a higher value to a brand than advertising, which is a widely accepted notion. Unfortunately, that value multiplier isn’t established across the industry. Is it three times more valuable than advertising? Five times more valuable? Even more than that? Additionally, not all clients pay rate card rates for advertising, meaning an even more skewed “equivalent.”

ROI is often king when it comes to measuring all tactics, especially marketing tactics. As an agency, it’s often difficult to provide ROI information when we often don’t receive financial information from our clients. In order to track true ROI, you must have financial information, such as revenue, to compare your investment against. Because that data isn’t easily accessible, it’s nearly impossible to deliver an accurate ROI figure to clients and leadership.

One of the biggest benefits of a public relations campaign is how you can position your brand in the minds of current or potential customers. It’s vital to measure if stakeholders view your brand more favorably or less following PR efforts. Measuring brand impact can help evaluate the sentiment of key audiences. In conjunction with monitoring the sentiment your audience has toward your brand, the key messages you’re hoping to convey should also be coming through in your media coverage. Finally, the goal is to have PR efforts shared on social channels. Social amplification of public relations coverage acts as word-of-mouth advertising creating additional awareness and trust with current and potential customers.

Share of voice is a great measure of a public relations campaign because it follows trends in industry dominance. Share of voice is calculated by taking the coverage your brand receives and comparing it to the coverage your competitors receive, to produce a percentage of your media attention weighed against the industry. This allows companies to measure themselves against their biggest competitors, which aids in gauging mindshare for current and potential customers. In addition to solidifying mindshare, following the movement of share of voice ensures coverage is matching efforts.

Another important measure of your public relations campaign is mentions. How many times your brand is mentioned in various publications assists in creating buzz and awareness. Additionally, measuring the value of the publications your brand is mentioned in is key. If the publication is reaching a key audience segment, it’s providing more value than a publication that reaches portions that don’t have viable customers in its circulation. The type and tone of mention are also important. Higher profile, positive mentions, such as features or cover stories, provide more value to a brand as opposed to pieces that are not as predominant or are negative in tone.

Google Analytics is another area where PR efforts can be felt. Using your analytics data as a control, companies can follow their public relations results. For example, if unique users go up after a press release is sent and all other variables stay constant, it may indicate a successful brand awareness campaign. If returning users increases, it may be an indicator of brand trust. While Google Analytics doesn’t provide a complete view of public relations efforts, it delivers a glimpse into the success of a PR push.

Are you looking to up your PR game? Drop us a line at news@flint-group.com or visit our website. We’d love to chat through opportunities with you!

By signing up, you agree to receive emails from Flint Group. Unsubscribe at any time by clicking on the unsubscribe link at the bottom of our emails. Questions?