Please do pay attention to that man behind the curtain 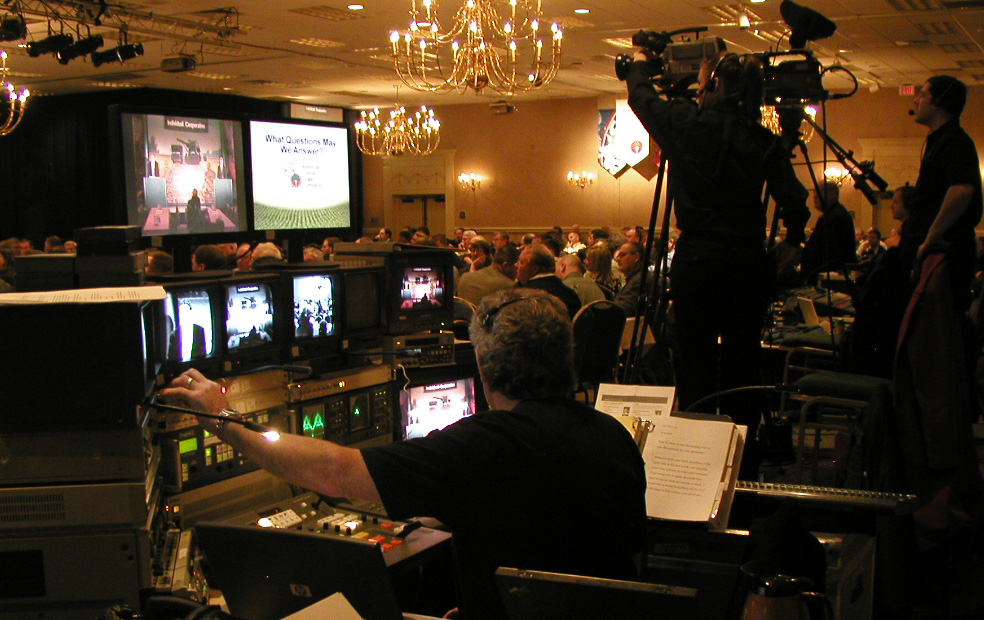 Some of our projects require a little magic; others, a lot. For big doses of magic, we turn to Lee Massey of our Media Productions Division.

In his words, Lee “keeps the plates spinning.” (If you’re over age 40 and/or appreciate the Ed Sullivan show, you may smile at that). “We are very lucky to be involved in so many diverse, fun, cool projects, from television and radio ads, long form videos, music projects and special events,” Lee explains.

Lee, far right, and team gearing up for production during a special event.

Officially, Lee is President and Executive Producer of Media Productions, the company he founded nearly 40 years ago and integrated to the Flint Group in 2006. Based in Fargo, Lee and his team provide full-service audio, video, film, photography, and live event production.

“One of the things that I really love about my job is that no two days are alike. I may be in the office one day reviewing business projections, working on billing, dealing with issues related to our building and catching up on paperwork,” Lee says.

“The next day I may be out directing an event, and the day after that, I might be meeting with a client discussing a concept for a new project. Other days find me designing scenery or meeting with our team to figure out how we’re going to pull off that new concept,” he says. “I love seeing things that our team has worked on come to fruition.”

Of bands and bars with Johnny Holm

Lee’s current endeavors are the culmination of a lifetime in music and production. He plays keyboards (piano), saxophone and does vocals.

Lee on the keyboards and vocals in a recent gig.

“I played in bands when I was a teenager, but quit playing when I started college in 1968. I was carrying a full academic load and working nearly full time at WDAY-TV. After graduation in 1972, a buddy of mine, Johnny Holm, was playing in a bar and I sat in and played with his band one night. We had a great time, and that was actually the start of the Johnny Holm Band, and they still play gigs around the Midwest,” Lee explains.

“Back then, we added more musicians, and it was truly an exciting and fun ride for about three years. But the band started traveling a lot, and I was working full-time and starting a family. It just became too much, so I had to leave the band and put playing on the back burner. My last real gig with Johnny was recording the ‘Lightning Bar Blues’ album shortly after we built Media Productions’ (then called Audio Media) first recording studio,” Lee says.

“We started our company as an audio recording studio, and most of my time was spent writing commercial music. We evolved and had some great opportunities to grow. We got into different lines of business and explored a lot of emerging technology, and we’ve had wonderful opportunities to work on some very fun, creative projects. But everything we’ve done over the past 35+ years has been based on collaboration and passion,” Lee says.

Back on stage with the Front Fenders

“I had a few opportunities to fill in with bands occasionally, but really took about a 30-year hiatus from performing. Then, five years ago, the opportunity to join the Front Fenders came up and, as they say, the rest is history,” Lee says.

“Now, we’re booked nearly every weekend, so I get to play a lot. But there’s a reason why it’s called ‘playing.’ Yes, we’re busy, we’re booked a lot, and there are some long days and gnarly travel, but it’s fun. We get the crowd involved, see people have fun and enjoy what we’re doing. It really is play – not work,” Lee says.

Shhhh on some stories

“Some of the really big shows have been a lot of fun. We’ve opened for 3 Dog Night and The Gin Blossoms at the Fargodome, headlined at the ND State Fair (and used the same trailer/dressing room that KISS used the night before), flown to Boca Raton, Florida, and Burlington, Vermont, for one-night shows at high profile events, and played for Senator Hoeven’s daughter’s wedding,” Lee says. “But because of the audience involvement that’s part of our show, every night is unique and there’s a story from each performance. Some that shouldn’t be told in public.”

Lee’s wife, Linda, also works at Media Productions. The two are now empty nesters, and moved permanently to the lake nine years ago. “Our weeknights aren’t as hectic as they once were, but we do now have a one-hour commute, and we rarely leave the office before 6:00 p.m., so our evenings seem a bit shorter now,” he says with a grin. “Plus, we’re old and go to bed early.”

“Summer weeknights, I’m outside in our gardens, putting something in—or taking something out of—the lake or throwing something for our one-year-old German Shepherd. I also try to get a few runs in during the week and quite often, that’s in the evening. I’m also kind of a news junkie, so I try to read the paper. Yes, I prefer a newspaper to online news. I try to stay awake to catch the 10 p.m. TV newscasts. Winter weeknights, we spend a little more time inside cooking and sipping wine. We also try to Skype with kids and grandkids, and evenings seem to be the best time for that,” Lee says.

The retriever, left, and the thrower, right.

Weekend days, Lee runs, bikes, boats, swims and gardens in the summer; snowshoes, runs and skis in the winter. And, of course, he’s throwing something for the dog to retrieve in every season.

Weekend evenings are for the Front Fenders. “The past few years, we’ve been booked nearly every weekend night, and since we play all over the tri-state area, the weekends stay pretty busy. The good news is that we do have a lot of lake-area bookings throughout the summer, so it’s not like we’re missing the entire weekend. Our ‘band-free’ weekend nights typically involve spending time with kids and grandkids, and going out for dinner,” Lee says.

Lee admits his responsibilities can be a tough balancing act. Remember the plate spinner? But, as he says: “I love spending time with family and friends, and also love playing in the band. Both nourish parts of me and I know that I need both to feel fulfilled. I’m also pretty passionate about running. I used to run and train a lot for long distances. I’ve run five full marathons, competed in three triathlons and still try and run at least one half marathon every year.”

“We also really love to travel, and I’m pretty passionate about that too,” Lee says. “So, in a perfect world, I’d be a rock star, traveling around the world with family and friends, writing songs about life, love and locations. Then I guess I’d have to change my name to Jimmy Buffett.

Behind the curtain and in the spotlight

“What I do for my Flint and Media Productions clients is primarily behind the scenes. When we’re on our game and everything is going right at an event, people don’t notice us. They may notice the end result such as the interesting scenery, great sound and lighting and special effects, but we need to remain pretty invisible. The same is true with video or audio projects. What people see or hear on their televisions, radios or computers is all about the message that we’re delivering for our clients. I’m very comfortable with that, and frankly I’m not real comfortable being on the other side of the camera.

“But, playing music takes me to an entirely different place. Now that I’m back playing music regularly, I don’t know if I would feel fulfilled without doing both. It’s a ying/yang balance thing, and I now know that when I’m doing both, I’m better at both,” Lee says.

Get to know a Flintster: Q + A with Lee!

Which job would you not want to have?

Cleaning up a venue after a concert.

What was your first job?

I delivered the Minneapolis Tribune.

What did it teach you?

Getting up early is a good thing, and people really appreciate consistency.

What is one thing you’d be willing to practice for an hour a day?

What’s the best advice you ever got?

My 8th grade speech teacher and theater coach, Ted Larson, sat me down one day and told me that I had a real talent for technical theater (he didn’t tell me that I had no talent as an actor, but some things you just know). He suggested I pursue technical theater and give it a real chance. A few years later, after following his advice, we got together again and he suggested that I apply for a job in television production at WDAY-TV. I was 16 years old and didn’t think I had a chance. But he encouraged me and actually called to set up an interview. I got the job and it was really the start of my career.

What sound do you love?

What scent do you love?