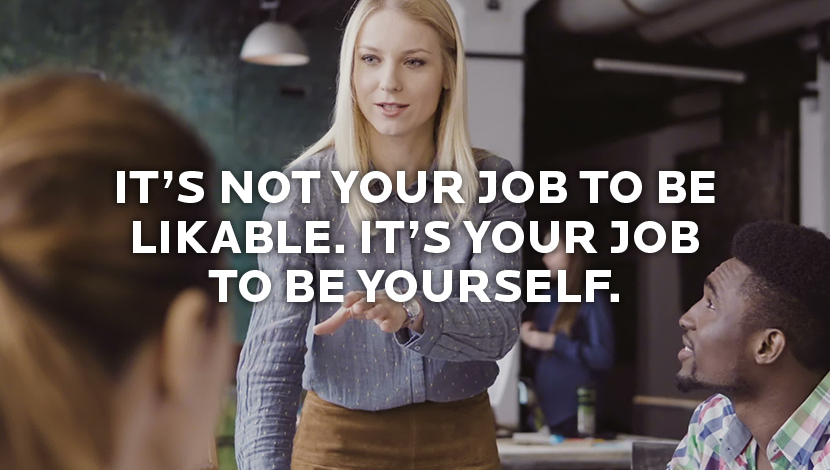 This is the second edition in a series of posts about women in business. You may also read part I, on women in leadership.

This is a great quote by Chimamanda Ngozi Adichie. She has written some very interesting pieces on feminism. Consider her quote and how it impacts our behavior. We can be our own worst enemies when it comes to what we can accomplish. And being “liked” messes with our heads.

Women often lose out on opportunities simply by not believing we are good enough, smart enough, capable enough or liked enough to accomplish whatever is in front of us. We get hung up on what others may think or things others have said about us that we internalize and let that bring us down. This is certainly more prevalent in women than in men. As this Forbes article on confidence in abilities puts it: “Men are confident about their ability at 60 percent, but women don’t feel confident until they’ve checked each item on the list.” The advice: women need to have more faith in ourselves. We, as women, have trouble believing in ourselves. And we can fuel that fire for each other, or we can help each other refresh.

A contributor to this belief system is the “crab mentality,” which exemplifies our behavior pretty well.

According to a Wikipedia entry:

Crab mentality is a phrase popular among Filipinos and was first coined by writer Ninotchka Rosca in reference to the phrase “crabs in a bucket.” It describes a way of thinking best described by the phrase “if I can’t have it, neither can you.” The metaphor refers to a pot of crabs. Individually, the crabs could easily escape from the pot, but instead, they grab at each other in a useless “king of the hill” competition, which prevents any from escaping and ensures their collective demise. The analogy in human behavior is that members of a group will attempt to “pull down” (negate or diminish the importance of) any member who achieves success beyond the others out of envy, conspiracy or competitive feelings.

I believe this crab mentality is unintentional. This is learned behavior passed on from generation to generation, and it feels like it’s currently exacerbated via social media. We are constantly comparing ourselves, our lives, our “likes” with others. Then there’s a natural inclination to lash out against one another.

I think through self-awareness we can change this. Here are some guidelines to do so:

And while we’re working on worrying less about people liking us, let’s also think about how we can like others more.

“There are going to be people along the way who will try to undercut your success. But if you just focus on the work and you don’t let people sidetrack you, someday when you get where you are going, you’ll know it was you and the people who love you who put you there.” – Taylor Swift