Home / Flint Blog / Women in business – Part 4: How do we handle the blurred lines?
Categories›

Women in business – Part 4: How do we handle the blurred lines? 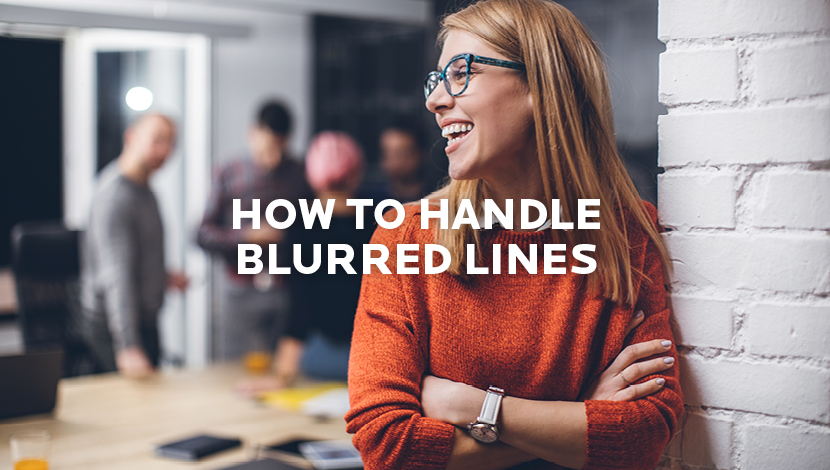 As the sexual misconduct/harassment/assault claims continue to pour in, we must continue thinking about how we will solve this problem for good.

I’ve known some amazing flirts throughout my career. Some are men, but just as many are women. And I can’t usually tell if it’s flirting or friendliness or simply more open personalities. My guess is that more often than not, it’s completely harmless and often found flattering, maybe affectionate, maybe an ego-boost. I would have a hard time defining the line that deems it inappropriate. But most people will tell you they know in their guts when the flirting just doesn’t feel appropriate anymore. That’s when an individual must say something – and organizations must have the mechanisms in place to address it without retribution.

The risk of over-correction

My fear is that all of the #metoo discussions, which are healthy and necessary, will send us in a spiral where good guys will distance themselves from women in an over-protective, self-preserving way that will potentially diminish women’s advancement. That is a threat.

A lesson from George

Bear with me here before you jump to any conclusions. I am a huge Seinfeld fan. Huge. I love the show. I can re-watch episode after episode. As we consider how to solve this problem with men and women working together, I recalled a Seinfeld episode where George hires a new secretary. He rejects one candidate after another as he looks for someone who he doesn’t find attractive. He finally settles on a woman who is a bit nerdy, extremely uptight-looking, prissy even, and believes he will be safe from temptation. Subsequently, he ends up having sex with her and in the heat of it promises her a significant increase in salary. Funny episode, no doubt, but how would that play in today’s culture? And what does it say exactly? That she had to consent to move ahead? That men should hire “unattractive” women? That attraction leads to sex? Did it start with “inappropriate flirting”? When did it become “inappropriate”? When they flirted? When they had sex? When he promised her the increase in salary?

No tolerance on harassment

There is fault on both sides of this issue. There should be no tolerance of sexual harassment and sexual assault. Mechanisms need to be in place to encourage women and men to report these instances quickly and fairly. People need to be educated in how to recognize it, and businesses need to understand what to do about it and to make sure there is a fair process before publicly accusing someone of wrong-doing. Mostly we all need to make sure we aren’t simply sweeping it under the rug in hopes it goes away.

But flirting is another challenge altogether

Flirting is an evasive term with very different levels of tolerance. In fact, studies show that men and women have differing motivations. In a 2004 review of the literature on flirting, Northern Illinois Professor Dryden Henningsen found that the behaviors around flirting broke down along gender norms: Men were significantly more likely to have a sexual motivation, while women tended to have a relational one.

It’s not always innocent, but sometimes it is.

Why does this matter?

Here’s why: Within the sensitivities of the culture that is sure to emerge from the #metoo movement, there is strong potential of over-correcting. As a business leader, how do we protect people (men and women) on both sides of this problem? It is murky territory. We don’t want qualified female candidates to be overlooked like George did, for fear of being too attractive or out of some misguided concern of being accused of something inappropriate.

None of this is easy. We are dealing with situations that often occur in private moments with no witnesses, no clear proof and indistinguishable levels of tolerance. I applaud the brave women and men who have come forward to tell their stories and effect change. Now we have to take it to the next level and ensure that changes are tangible and actionable.

We invite you to comment here with your own experiences and guidance.