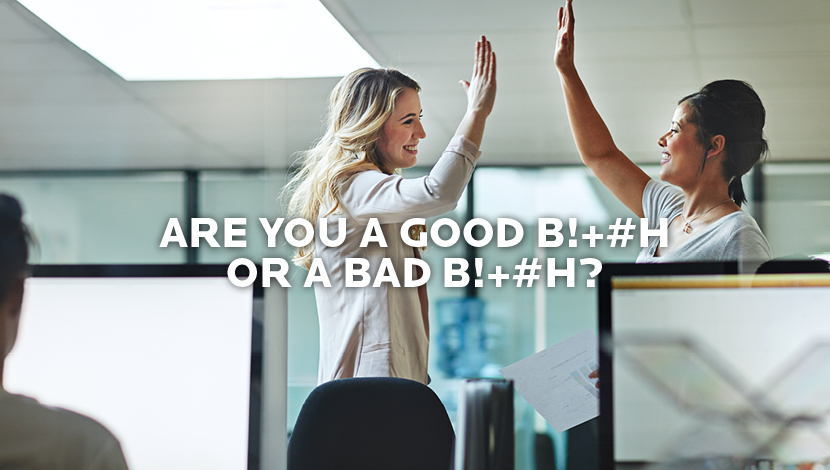 I am certain that I’ve been called a bitch more times than I will ever know. I first realized this in the early years of my career when I worked in a predominantly male-run industry (I guess that narrows it down to MOST industries). But, generally speaking, it wasn’t the guys who were saying it. It was other women. In my case, it was older women who most definitely weren’t going to support a new up-and-comer in their office. Interesting, isn’t it?

Our lack of support for each other has slowed our advancement and can kill our confidence. For me, though, at some point in the early ’90s, I decided to embrace it. Maybe I was ahead of my time or, more likely, simply didn’t know any better. It was a mental shift to go from understanding the term as a complete and total insult to a reaction of my ability to make things happen.

Being a bitch has served me well in my career. Often the word is associated with traits like assertiveness, drive, tactlessness and being non-apologetic. Some are true of me for sure. When I started at Flint, I was considered a bit of an aberration. I was blunter and more confrontational than many of the employees were used to. This approach was addressed by my supervisor, and I spent approximately 12 hours obsessing over how I needed to change. It didn’t stick though. I already understood that hard discussions were crucial to forward movement. This led me to learn where I need to adjust versus apologize.

Women tend to apologize for everything. I see it in my office every day. Men don’t apologize nearly as often. I think they have a better sense of the diminished returns on apologizing. Or, and this seems more likely, women apologize because we are so unfairly focused on our own shortcomings. The slightest mistake seems like the biggest deal. And if no one is calling us out on it, or maybe they are, we brood on it for hours and hours and days and days.

There’s a famous quote from Tina Fey: “Bitches get stuff done.” When you look at it that way, it surely can’t be all bad! I recently saw the Broadway musical “Mean Girls”. The main character, Cady, realizes that she has adopted bad behavior as she tries to maneuver the mean girls. Through these experiences on stage, we see that meanness can be as “morally ambiguous as niceness.” Think about that – it comes down to how we define our actions.

This is one of my favorite lines in the play:

“And people say I’m a bitch. But you know what they would call me if I was a boy?” Regina says.

Do you see what happened there? The same traits that make women “bitchy” are considered normal, acceptable and even celebrated behaviors in men. Not fair? Maybe. But how many of us are getting in our own way?

Lack of confidence is a big hurdle for women, and I believe it gets entangled with the bitch perception. In an article in Forbes, the author observes that, “A lack of belief in our own value, worth and ability tempers female ambition & holds women back.”

If we continue to consider “bitch” a highly negative term that is synonymous with actions and attitudes like assertiveness, combativeness, etc., we will continue to hold ourselves back. OR, we can flip it and consider it a compliment!

Some tips for thinking differently:

So what do you think? Tell us!