Women in Business – The tribe versus the team 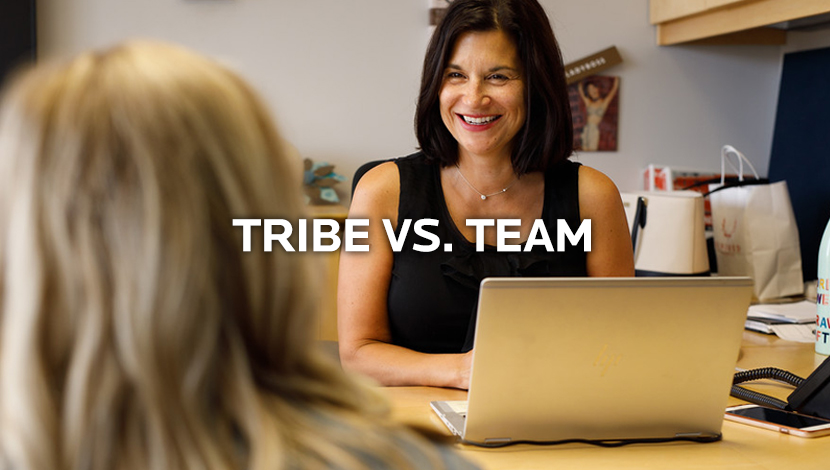 Professor Leigh Thompson of the Kellogg School of Management says “[a] team is a group of people who are interdependent with respect to information, resources, knowledge and skills and who seek to combine their efforts to achieve a common goal.”

I’ve been obsessing lately on how we get beyond where we are today in the men versus women and equality BS. I want to shout, “BUT WE’RE NOT THE SAME!” And that’s how we need to address our differences.

There are obvious physical differences, of course, and there are differences that aren’t as obvious or that we don’t think about as much. In no way am I saying this is true of every man or every woman. Personalities are complex. Leadership traits are varied. Using myself as an example, I display traits differently depending on the situation, the people in the room, my level of understanding, how confident I am in the situation, etc.

Keep in mind that I grew up in the era of “no pain, no gain” and “failure is not an option.” There wasn’t room for growth or appreciation for lessons learned. It was more of a win-at-all-costs mentality. Women conformed to get ahead.

We have been conditioned to expect stereotypical masculine traits to equate with strong leadership. Whether it’s true or not, that is what we see. That is what we are used to. That is how businesses are run.

Positive communal traits, such as kindness and trustworthiness, which are stereotypically feminine, were less important.

From a business standpoint, I embraced the idea that if I adhered to a more male standard of behavior in my career, I would likely be more successful. I did have the benefit of growing up with four older brothers and taught myself over time to hold in (for the most part) my emotional reactions to things. That approach was helpful to me. I’m saying it was helpful, not necessarily right or good. I worked hard on being direct, am naturally competitive, performance-focused, transactional – all traits considered to lean masculine.

But the world is changing (Finally!) and we are embracing leadership qualities that often have been more closely associated with women – empathy, vulnerability, humility, inclusiveness, generosity, balance, patience.

I will be the first to admit, I need to work on both sides of this leadership equation. There are good and bad outcomes from both styles. Furthermore, it depends on your business, your specific job expectations, your employees, your audience or customers. There is no one-size-fits-all approach. I would also argue that how these traits manifest themselves can vary from situation to situation. You may have team members that thrive under a more direct style and team members that need a bit more nurturing. To further complicate, direct style and other masculine traits that are found at the leadership level, are more widely accepted coming from men than women.

“Our results suggest that the concentration of men in top decision-making roles such as corporate boards and chief executive offices may be self-sustaining because men, in particular, tend to devalue more communal styles of leadership – and men are typically the gatekeepers to top organizational positions of prestige and authority,” Vial says.

In addition, the perception that masculine traits are necessary for leadership roles might prevent women from seeking those roles, the researchers posit.

You cannot convince me that it is an even playing field for men and women. That is partially because WE ARE DIFFERENT! Take the concept of women and their tribe. This is something that has become a strong ideal over the last decade or so. It’s a real thing. I have and participate in a tribe, a group of women who I trust implicitly. Who are there for me through thick and thin. Who support who I am, who I want to be and push me when I need it.

I have learned through self-reflection and honest introspection that I am fallible in probably every way possible. But it turns out, so is everyone else. It is helpful to me when one of my tribe not so gently shares insight into areas where I can improve. My tribe understands all aspects of me and will fiercely defend me out of love and friendship. They aren’t a safety net, but they will pick me up when I fall.

Contrast this with the concept of “team.” In no way am I saying that women do not have a team or that men and women aren’t on the same team. But consider the idea that men gravitate toward the “team” concept versus women and their “tribe.” This ties closely to leadership traits and other personality traits that we may deem more masculine. Men generally, but not always, approach situations with a win-lose mentality. Team. Whereas women are more likely to approach situations with a win-win mentality. Tribe. For men, when the game is over, the game is over. For women, the tribe may vacillate on the outcome for months and months. Never completely moving on. Please! I’m not implying this is true for every man or every woman for every situation all the time. I’m speaking in general. Regardless, there are differences that we can embrace and exercise ways to build on strengths that work in more inclusive ways.

Business is changing. What people care about for brands is changing. Who people are willing to work for is changing. Today more than ever, brands need a strong value proposition. In order for businesses to maintain a strong brand, leadership must embrace a more holistic approach. Taking a more inclusive direction for leadership and management will serve companies well through a time of evolution, opening up new ways to lead, work and live.

As for men and women, our ability to recognize and embrace our differences presents us with an opportunity to become our best selves. We need to look at how we all can grow as leaders not fitting into one stereotype or the other. We can find room for the team and the tribe and value both. Specifically, for the women reading this, take a good, hard, fair look at yourself and consider how you judge male leaders versus female leaders. Take care not to judge a woman who is asserting herself in a way that is considered more masculine and think about how you can support her. Subsequently, value and encourage more feminine traits for men in the same way.

“Whether you’re talking about corporate America or Silicon Valley, it’s still a man’s world with masculine structures and women conforming to those ideals,” says Gerzema. “Feminine traits and values are a new form of innovation. They are an untapped form of competitive advantage.”