Home / Flint Blog / Women in business: You need to calm down
Categories›

Women in business: You need to calm down 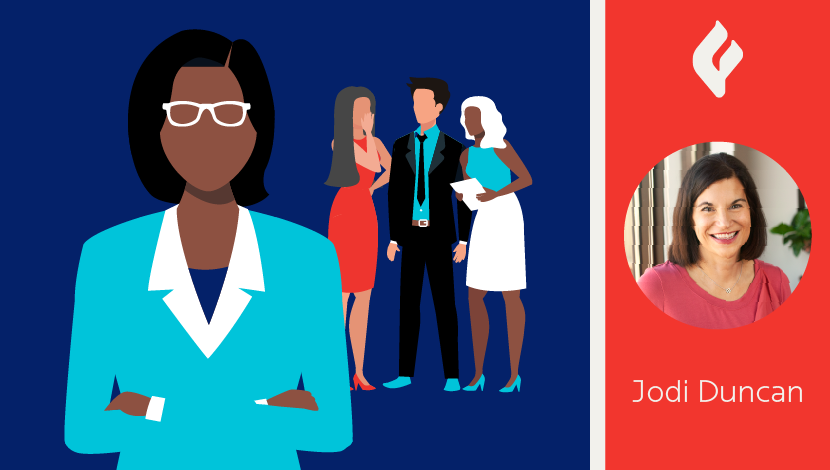 It is fascinating how two people can see a situation differently depending on their perspective. And what ensues is drama. Women tend to interpret actions that feed a workforce drama narrative. I’ve been there, done that, participated in it and complained about it. If we’re being honest with ourselves, this would be true of most of us. Men do this too, but this is about women in business. Not to give our male counterparts a pass, but we, as women, drive this more than men do.

I have a million examples of this throughout my career. Most women probably do. Very recently one of my daughters experienced this. Her manager asked the small group of employees about watching a television show. No one responded, and the manager was very upset that no one responded. While this seems silly, the aftershocks were sillier. On this particular day, Allison had a handful of situations that caused her emotions to escalate. It was clear to me that she was telling herself stories that contributed to the drama. Because she was in the midst of it, she wasn’t able to see that. As we talked, she calmed down, zoned in on why she was feeling what she was feeling, found her footing and accepted that she was contributing to the drama. What I appreciate about Allison is that she always takes the time to self-reflect. She acknowledges when she is fueling the fire, especially if it’s in her own mind.

The amount of time and energy that we as women waste on unnecessary, misinterpreted drama is unhealthy and unhelpful. But worse, we are instigators of it. How many times have you taken a comment and added your own dramatic spin to it? This makes for excellent storytelling; however, it can be unintentionally damaging. Consider the concept of “the story I’m telling myself.” This is one of the most transformative, thought-provoking ideas that I learned from Crucial Conversations training. Part of being self-aware is recognizing that you are bringing something to the drama. You are contributing to the story. Admitting this is extremely helpful.

Let’s say that you have that down. You understand this is your version of the story, your interpretation of the issue. Be cognizant that the other characters that you are talking with also had their own version of the story. Think about Allison. She told herself a story about her boss’ reaction. Her boss had her own story. Ultimately, you can have layers of drama from multiple people skewing the tale. A helpful practice is to understand the drama queens in your circle. We all know them and can identify them easily. They tell THE BEST stories in the most dramatic of ways. Somehow someone having a bad day turns into “she hates working here” or “she thinks you don’t like her.” You get what I’m saying – layering drama on top of drama so the story is so skewed that it doesn’t even make sense.

If you can effectively recognize where there’s additional drama, the issues and passion can be uncovered and extremely helpful. It involves practicing self-awareness and the ability to dissect the story to find the granules of truth that you can act on. Try to consider this whether you’re on the receiving end or the one spinning the story.

1. Save the drama for your mama.

Literally and figuratively, this is a good practice. You can improve your workplace considerably if you are very selective with whom you share or embark on dramatic discussions. Be mindful about who you trust and how you tell your story.

2. Be aware of your own sensitivities.

Women have differing levels of sensitivities that can throw them into full-on insecurity. I have triggers that may not faze someone else. There are many times I’ve learned that I unintentionally hurt someone’s feelings that I was completely clueless about. I have to very consciously tell myself that “not everyone thinks like me,” and “not everyone reacts the same way I do to feedback.”

It is significantly more productive to have difficult conversations face to face. For whatever reason, many people struggle with direct conversations. Bad feelings fester when issues aren’t addressed. I’ve also found that if you address issues broadly, seldom does the person at the heart of the actual problem understand it’s directed at them. In the spirit of constant improvement, open dialogue is critical.

In business, we should approach drama and issues with determination to resolve the problem. I really appreciate when people come to me with their issues but include their ideas to correct the issue. A good approach to drama is to come up with solutions, whether you’re the instigator of the drama or the recipient. Additionally, once it’s resolved Let. It. Go.

I write about this a lot. At the end of the day confidence is not “they will like me.” Confidence is “I’ll be fine if they don’t.” Let’s help other women understand this and work on building each other up, rather than letting drama tear us down.

I need to work on this. Because I have an affinity for direct communication, it’s not always received in the way intended. Because I’m more competitive than sensitive, criticism makes me want to work harder. I know not everyone is like that. Understanding that people react and respond very differently can shape better conversations with better outcomes and less drama.

In conclusion, remember these words from the insightful Taylor Swift: Sometimes we need to just stop. We need to calm down.